Dare to Dissemble is my little online ranting place, where I air my thoughts about the ridiculous state of affairs at the University of Alberta--a formerly strong public institution with tons of potential being driven into the ground by inept governance and irresponsible government funding policies. Comments are welcome, but not expected. Like most blogs on the internet, this one languishes in obscurity and is read for the most part by its proprietor.

A common ritual around my house is for our cats to make a run for the door when the kid leaves for school in the morning.  Typically, they squat on the cold porch and complain to us about the temperature outside, and it does not take too much to coax them back inside.  (They are essentially full-time indoor cats.)  However, occasionally they will see something intriguing and the instincts take over.  Then it can get interesting.

This morning, when it was -13 outside, they both sat on the doormat as usual.  However, then one of them suddenly crouched down and scuttled towards the street, having seen something of interest.  I followed her out and saw that she was nearly at the street, approaching a large white rabbit.  At that moment, a large raptor (either owl or hawk) swooped down to grab the rabbit, but the presence of our cat and my own sudden appearance distracted it, allowing the rabbit to escape.  The cat realized she had just had a brush with doom, and quickly ran back inside.

I wonder if that rabbit realizes it owes its life to the little cat (probably smaller than the rabbit) that was pretending it was a predator?
Posted by Arrik at 11:24 AM No comments:

The Return of Movie Friday

Last night, I went to see Serenity at the IMAX theatre at the Telus World of Science.  This stand-alone film is a spin-off of the much-loved SF-Western TV series created by Joss Whedon, Firefly.  I love that series, and had watched the movie a couple of times on my home TV.  To be honest, I had been underwhelmed.  But I decided to go in order to see if viewing in a (REALLY) big screen made any difference.

Short answer:  Yes.  I highly recommend seeing this in a real theatre if you have a chance.

Here is the trailer:

When I received the e-mail below earlier today, I thought of our now-retired blogger-in-chief, Jeremy Richards.  What say you, Jeremy? 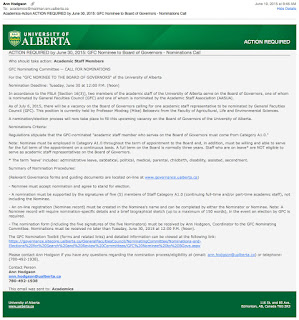 Also, am I the only one who finds these "ACTION REQUIRED" subject lines on e-mails from Central extremely annoying?
Posted by Arrik at 9:02 AM No comments:

The University of Illinois at Urbana-Champaign made an offer to Steven Salaita, then rescinded last August it after he made several intemperate tweets regarding Israel's bombing of Gaza.  The university has stonewalled all attempts by Salaita to learn who may have influenced this decision.  A judge has now ruled that they must provide the requested documents.  Could get very unpleasant for UIUC.
Posted by Arrik at 3:05 PM No comments:

With respect to the previous post ("Is There Anything the Modern University President Won't Do for Money?"), here is a column from Frank Bruni in today's New York Times on the alarming trend of escalating salaries for university presidents.  The huge paycheques and golden parachutes awarded to people like Yale's Richard Levin ($8.5M lump sum retirement nest egg) or Ohio State's E. Gordon Gee ($6M cash-out package) make me wonder what our own fearless leader will take with her when she departs this summer.  By the time we find out, she'll be long gone, and it will be water under the bridge.  But how many times must our BoG throw huge sums of money around for upper administrators, while doing everything they can to screw the rank and file faculty of AASUA before we acknowledge that these people are both incompetent and evil?
Posted by Arrik at 2:54 PM 1 comment:

Is There Anything the Modern University President Won’t do for Money?

The title to this post is the tag line of Erik Loomis' takedown of NYU for its abysmal labour practices in Abu Dhabi, where it is building a branch campus.  This is the logical outcome of the "internationalization" that we keep hearing about.  In the end, always follow the money.
Posted by Arrik at 8:47 AM No comments:

What's the Point of a Professor

Mark Bauerlein, an English professor at Emory, wrote a New York Times op/ed criticizing what he identifies as the deteriorating level of commitment to educational rigour demonstrated by today's faculty members.  It's a fairly fatuous piece, and this retort from Erik Loomis at LGM nicely highlights its deficiencies, including a significant excerpt from a much longer diatribe by the Tattooed Professor.  As they say, read the whole thing.
Posted by Arrik at 11:45 AM 1 comment: